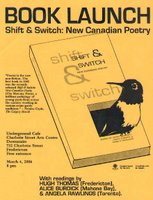 First half of the program was Lisa Moore's short story "The Stylist" read by Holly Hogan.

Show ended with Motion, from Motion in Poetry (Womens Press), and her poem « J'ouvert ».

NOTE: There will be no APB on 7 March 2006 as I'm again being preempted by a UNB hockey playoff game.

Again?! Can’t believe it. Few weeks I wasn’t able to listen to the APB, so I was looking forward to next Tuesday. Last time when I was at home on Tuesday was the same…. Bad timing I guess.