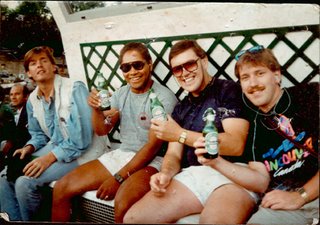 Think it's from another decade, possible several decades ago. Mustache on Vancouver-shirt-wearing buddy on the right seems dated. As do the big sunglasses on the three Heine men, the white vest over the denim shirt on the Andy Gibbs fan on the left. Think it was taken beside water—if that's water and part of a boat beside the balding head of the not-subject-of-the-photograph man on far left.

Wow! the Andy Gibbs look alike is Vernon Moore he was a prominent writer of short stories and some poetry.70's/80's in fredericton nb.notice the black journal,that thing never left his pen or hand. He had hords of these.He and his brother lived with their grandmother after their parents where killed in a tragic car accident going to Saintjohn. Anyhow,Vernon use to hold writing workshops at his grammies on needham street. The 3 others where at this workshop all the way from BC..Cool eh! I saw Vernon last year in Vancouver,still writing,he and his wife were leaving for China,where Vernon would find new inspiration.
And I hope everything is working for them. Life is sooooooo something,something....have a good day.Great blog. Came back to read more.

Yes, that's Vernon, L. and Tracy G. in the middle..I'd like to forward this blogspot to Vernon in China,with permission from Broken Joe...don't know when they'll get it they have moved far into the interior. Vernon's writing a travel log/journal..he's married to my sister...P. Tan, Vancouver

Okay, I've known Vernon as a writer for years, since before I moved to Fredericton and he returned from teaching in Newfoundland. Never would have guessed that this was earlier him. Thank you so much for finding and sharing this!

Know the white house on Needham. It's very close to where I live on York. Have even met your sister with him once or twice years ago before he went off to Korea. Have known their daughter Candace since her early teens and Senseless Rambling zine, through her years at UNB, and her very active involvement in CHSR FM.

3 people,3 different parts of the globe and we all know the same person..congrats on the Barry Award.
Did you ever know a Nova Scotia poet Eddy Clinton? Whatever happened to him, he was in F'ton about the same time. It is a small world! I will visit this blog again. Take care.....