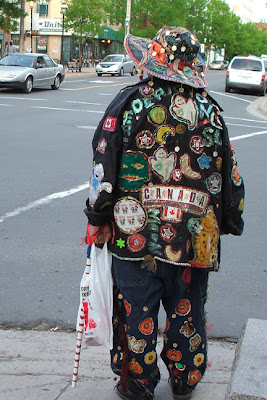 A month early for the Canada Day weekend,, and not an extra for Sticks and Stones, I just happened to catch this woman as I was turning the corner on a run to Victory Meat on Thursday.

Early Friday, 6:30 am, I was on the corner of Queen and York as a flag waving, hockey stick banging extra for Sticks and Stones. Then we shuffled over to the Lady Beaverbook Arena, to the extras' big white tent. No sooner had I filled out the extras photo release form for the low day rate than they asked for adults without kids present to become media (journalists and photographers) and I became one of them. No question. We were hived off, herded to Costume for their onceover (I was dressed just fine) and put in an arena dressing room to complete a new release/pay form at a higher rate. Nice! 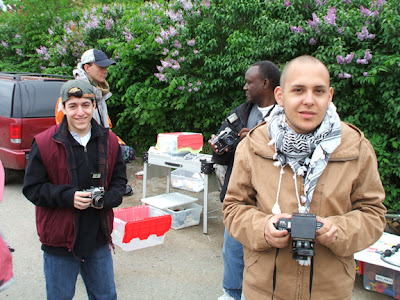 Eventually, we were taken outside to props to be equipted with 35mm SLR camera with flashes, camera bags for a few of us. This is my pic of several of the others, including Carlos with the great scarf. They wanted one of us become a camera operater with a real Sony Betamax camera with the heavy belt and a mini-spot mounted on top, and they chose me. 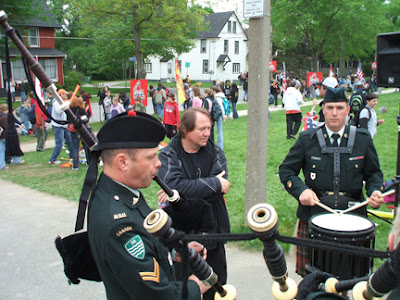 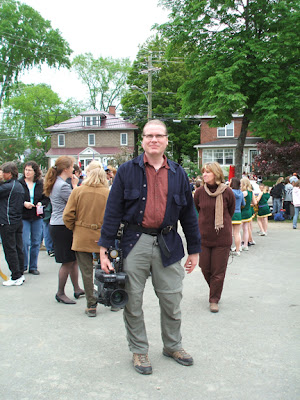 Me with my heavy prop Betamax. Phonto taken with my camera by Lizette De Klerk (a.k.a. of "a Brockon family"). 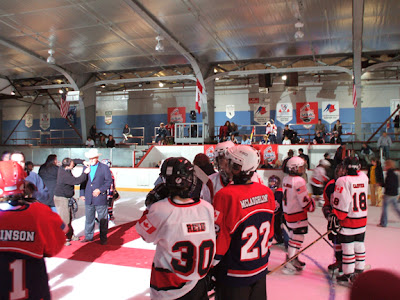 Being a "media" backgrounder, I was front and centre for the podium speech hockey team welcome outside, then on the ice in a media ring outside the hockey players and the red carpet. for the announcing of the players, the ceremonial dropping of the puck by "Frank Mahovalich", the real Eddie Shack (above, in the cowboy hat), and the bringing in of the Stanley Cup and the players hands-on acting with it.