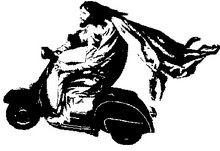 The show went pretty much as planned, with a twist. Biff (aka biffmitchell.com) joined me in the studio, with Eric Hill in the Fishbowl, and Andrew "Old Skull" Titus called in from his cellphone: three members of the recently formed BlackTop Motorcycle Gang writers' group here in Fredericton. They were circling the mics, talking the talk, and reading poems for that nebulous listening audience. 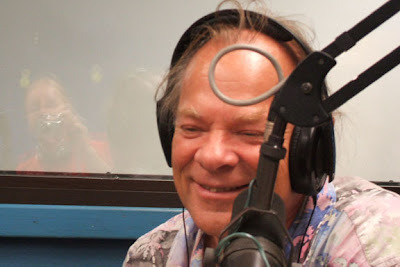 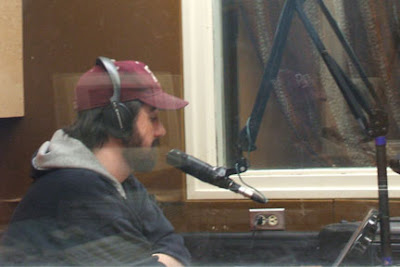 For breathers, I added three tracks from 12" vinyl in my possession:
• George Carlin "Occupation: Foole"
• Tom Konyves & Ken Norris "Were Men, It Is"
• Robert Priest "Inflation"

An unexpected surprise was me being invited, live on air, to join the BlackTop Motorcycle Gang writers' group, to become an eighth of a piece. Afterwards, Biff and me went to Alden Nowlan House for a pint; stumbled into Mary Ann's 50th b'day party, 2-for-1 happy hour prices; and an invasion of Frisbee [do they still call it Ultimate Frisbee?] team players to the point that skateboards were hanging in the great eastern white pine tree off the deck . . .

The show should be rebroadcast Saturday morning, 10-11 am. That's the time slot Scott named this afternoon, when he asked if I could resume recording program episodes to the DigiCart.