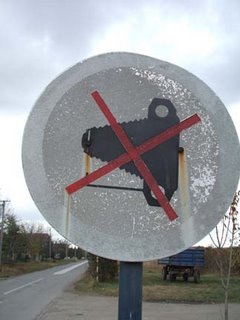 More than anything else about it, I like the camera used to illustrate this sign. Just how many, how few, of this type of camera are still in use anywhere today? Looks like a profile of one of the earliest Kodak cameras, or a knock-off model. I had to do a double-take to understand the sign's meaning.

One sees this sign when approaching military bases, including crumbling army reserve facilities across Serbia, or in front of the American embassy, or at any number of other government operations. Travel advisories are clear in stating that one must not photograph the police or armed forces personel, equipment and buildings.

What's not stated anywhere is the level of personal restriction one might encounter when someone who doesn't even look like an official at a train station or bus station or office building insists that you not take a picture . . . also grain silos, schools, bridges sometimes . . . the old structural inventory thing, I guess. Don't know how much of this is a hold-over from the soviet state under Tito or from more recent "civil" war.

Even tourists posing in front of some of the remaining NATO-bombed buildings in Beograd can have difficulty taking pictures or getting themselves posed and photographed [I've heard that some of these bombed buildings are now included in some walking tours of Beograd . . . but that's not the problem or challenge]. It's the police and/or armed forces or security people on every streetcorner and especially on embassy row, between intersections in front of buildings, lounging with special police car escorts for potential motorcades, and they're waiting, watching, and wired . . .

For months, I've wanted a picture of one of these signs. One time, this past week, while out walking, I simply used my camera to photograph this "no cameras-no photographs" road sign in Senta.

I don't know that I would have ever figured out what the sign meant if you hadn't elaborated. I thought it was a cart or a wheelbarrow or some sort of cannon. I'm much too young to remember when cameras looked like that ;-)