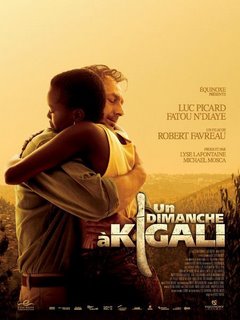 This eagerly awaited film adaptation of Gil Courtemanche's best-selling novel follows a Québécois journalist in Rwanda who falls in love with a Hutu waitress as violent civil unrest breaks out. After an absence of several months, he tries to find her. Resonating on many levels, the story addresses global politics, racial tension and powerful human emotions.

The Rwandan genocide has exhausted itself, leaving that country silent and decimated. Journalist Bernard Valcourt (Luc Picard) returns to once-familiar places, now recognizable only by a few remaining landmarks. He is desperate to find his former lover, a Rwandan woman detained as they fled together. Fragments of information prove inconclusive and frustrating.

"This book is fiction. But it is also a chronicle and an eyewitness report," journalist Gil Courtemanche writes in the preface to his novel Un Dimanche à la piscine à Kigali, upon which this film is based. Un Dimanche à Kigali moves between two time periods—before the genocide and after—and the juxtaposition starkly reveals the devastation that took place over one hundred days.

In the days leading up to the atrocities, Bernard meets Gentille (Fatou N'Diaye), a waitress at the Hôtel des Mille Collines, and they become involved. He is a rundown older man, she a stunning young woman; their affair could be a simple transaction, but they strive to keep their love pure. It is their grasping for something real that has the power to harm them most. As tensions escalate, they find themselves in inescapable roles: she is seen as a Tutsi and her life is more endangered every day; he is a white foreigner who can leave at any time.

Bernard knows Gentille didn't get out and holds himself accountable. This urgent unknown—what happened to her—creates a powerful inexorability that drives the film. His hesitation in leaving mirrors the paralysis of the West; upon his return, he can only search through ruins, willing a happy ending he hasn't earned. Picard is riveting as Bernard—his sense of urgency is palpable, his longing and regret unforgettable. Director Robert Favreau crafts a vivid, textured world where beauty and horror live side by side. The story unfolds with intelligence, emotion and uncompromising realism, and the cast is uniformly superb.

[I had the great fortune to meet the author Gil Courtemanche and to be at numerous Beograd Book Fair 2005 and Canadian Embassy organized activites alongside him as he launched the Serbia edition of this book and did an incredible 38 television, radio and print media interviews. Sometimes we talked over casual beer & cigarettes (he smokes, not me) while waiting in the Palace Hotel lobby for the day's drives and book circus to begin. If you can't read French, you can read Patricia Claxton's powerful and stunning translation into English, A Sunday at the Pool in Kigali. Highly recommended!—Broken Joe]
Posted by Joe Blades at 7:03 a.m.

ditto on the film,