Lander's The Art of the Chapbook 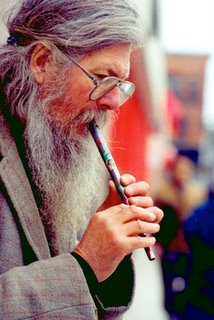 Several years ago, when he was penny whistle and poeming his way across Canada, Tim Lander was in Fredericton . . . a long way from his home in Nanaimo, British Columbia.

Usually, he spent his days in Victoria and Vancouver, with travels through the mountains to Calgary and Edmonton, Alberta. Occasionally, he made it as far east as Toronto. But this time, March 2000, he was on his way to visit family back in England. Tim's a true itinerant poet-publisher.

One of the things that happened while he was in Fredericton was talks with me that led to him sending a pile of poems that, with my too slow work, and his responses, eventually became the manuscript for the long awaited and long overdue perfect bound, trade book Inappropriate Behaviour (Broken Jaw Press, 2006).

It's the second volume of Lander's collected poems. The first was The Glass Book (Victoria, BC: Ekstasis Editions, 1999).

Tim's lifework for decades has been the writing and performing of poems, and the publishing of these poems in small handsewn books and chapbooks that he's make as he needed copies. He'd earn his way by playing the tin whistle, or selling poems for a penny, and handselling his handbound chapbooks that were often composed in his handwriting and illustrated with his line drawings. Occasionally he's had letterpress printed chapbooks: you know . . . lead type blocked with furniture and grippers, ink on rollers, fed one sheet of paper at a time. Beautiful . . . and small print-runs! If you know him, or meet him on the street, chances are that you can buy copies of his chapbook publications. If you don't meet him "by chance" I'd suggest you go the "by appointment" route and order/purchase copies of both books. 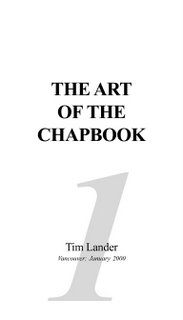 A few months before Tim appeared in Fredericton, he had given a talk-workshop to the publishing students at Simon Fraser University in Vancouver (Jauary 2000). Here he rough typed version of his presentation and wanted some copies as a handout. I did a layout based upon his prefered format of paper-page-book, gave it an ISBN and published it in-house by printing it with my OkiPage 6e LED desktop printer on legal size paper. Since that time there had been info on Broken Jaw's chapbooks webpage for people to send a SASE to receive a free copy of Tim's instructional essay. SASEs with USA postage stamps do not work from Canada (and I'm pretty certain that more queries and requests for the essay were coming from the USA than from across Canada) . . .

This past week, I finally got around to doing something that I've wanted to do for at least a year. I've made a slightly reformated version of Tim's essay to be a free, downloadable PDF for/from the Broken Jaw Press website. As an eBook it should have greater accessibility to interested people everywhere. More so than the free print edition of 2000. It is still formated as a 4-up sheet to be printed on 8.5 x 11 (legal) paper. After you print the first side, you will need to rotate the sheet of paper 180% (top to bottom) before printing the second side. It's the only way you'll get the proper page allignment to sew a one-signature chapbook from the PDF.

Use the link below to get your copy today!

The Art of the Chapbook
(BJP eBook 51), essay by Tim Lander