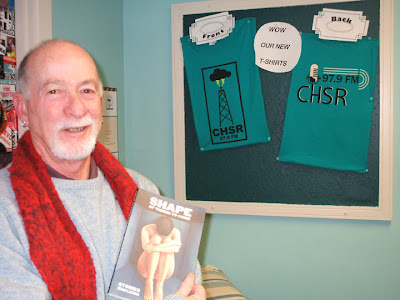 [I've known him as a poet for something over a score of years; since 1980ish through Leslie Choyce of Pottersfield Press.] In the first half of the show, we had a lively discussion on the arts; the Banff Centre; and on the writing and publishing community of Prince Edward Island.

In the second half, we promoted his new collection of short fiction, Shape of Things to Come(Charlottetown: Acorn Press) and he read excerpts from two short stories in the collection. Richard will also be promoting the book at 7 pm, Thursday, 20 Dec @ Westminster Books on King St, Fredericton.

Show ended with the "Emergency" poem by Hugh Hazelton followed by a recorded PSA for "Unsilent Night" happening at 7 PM, Friday.