Just under 20 years ago, I went to New York City for a term of Off Campus studies as the first half of the final year of my BFA S(tudio major in Intermedia) @ NSCAD. My anchor in New York was a curatorial internship at the New Museum of Contemporary Art on Broadway [I was the first Canadian to do so]. Bur I also took in plenty of other art & writing activities during my four intense months in the Big Apple. Took many photographs . . .

Yesterday, while going through a mountaineous pile of paper, albums, binders and boxes to ferret out the originals of concrete/visual poems for an anthology due out next year, I found several photo prints including the one below. 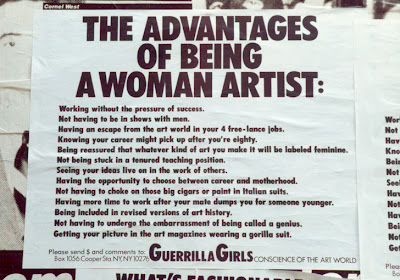 I had heard about the Guerrilla Girls at NSCAD, before going to NYC. This poster and other activist actions of theirs were truly incredible, and totaly necessary. This group of women artists came together in 1985 to draw attention to issues and inequalities in the art world. With the assumed names of dead women artists, they wore gorilla masks in public, potested, and performed interventions.

I wasn't surprised today to find the Guerrilla Girls online and still fighting the good fight because the art world continues to be male-dominated and -controlled. One can buy framable copies of the current version of this poster and many other posters, stickers, T-shirts, etc. to raise local awareness whereever one is and to financially support Guerrilla Girls' ongoing activities.