The nightmare finally over, half an hour after sunrise, I could almost have a beer and hope to drift into quiet day sleep . . .

Started out a quiet Sunday evening and night. Many of the unibirds nesting in town have flown south or west for a break. After the Friday afternoon and all-night snowstorm with the usual snowplow action in predawn Saturday, the weekend was quiet and warm enough both days to cause snowmelt. We didn't get to see the total lunar eclipse at sunset Saturday because of grey overcast promising light rain or flurries.

Machines woke me. Wasn't even 3 AM. They were on York Street with their flashy gold lights, chains, and beepers to confuse. A pack of snowbots in front of the building growling and bullying snowbanks into the street in a choreographed dance. By 4 AM they'd moved away but I could here them in the distance under the waning full moon, and I didn't really fall back into sleep. In the last hour of the night they returned. It should have been quiet enough this morning, without school buses, teacher and drop-off traffic, to have slept in. The environmental cleansers were back in full force. Snarling underneath my window. Shaking the walls. 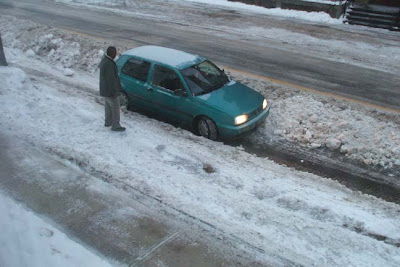 People and cars caught on both sides of this shortlived barrier. The wrong people on both sides. Sorry! You can't get it! You can't get out! Once cool drivers became frustrated even panic-stricken. Some charge the snow ridge in the hope they can breach it. This one thought they could run along slide and sneak out into the open but the end was block off. Hemmed in by snow and ice-covered curb, they had to reverse, and needed to be pushed back. 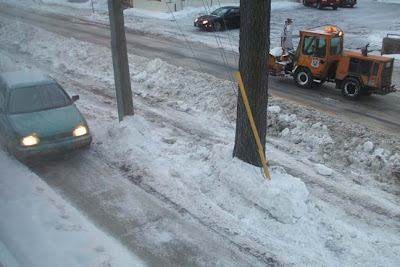 Escape made down the dawn lit sidewalk just as one of the smaller snowbots hovers threatening to harry or openly attack. 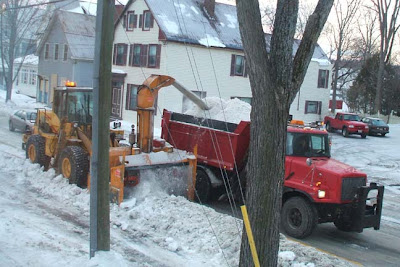 The voracious appetite of the beast's corkscrew mouth not even filled by the herded snow.