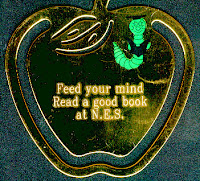 The Friday before March Break in NB public schools and universities I was upriver @ Nackawic Elementary School. Was in Peter Gorham's art room making an artist book to leave in the school library. Was there through the province's Writers-in-the-Schools program. Main thing I did was three intense journal writing workshops to get those 60 Grade 4 & 5 students inspired to start creative journals of their own. Then we gave each of them journal (hardboard covers, lined, from Dollarama). Kick started their use by having them put their name and phone number inside the front cover. Peter offered them the use of his date stamp. Next I suggest that they get another student to write or draw something in each other's journals. Some started with collecting phone numbers. Other students wanted other kids' signatures and/or my autograph and Peter's (as their teacher). I also gave out some postcards and MAPP business cards. I saw drawings. Saw stickers being put on pages. Saw student achievement certificates, and brochures for the library being added. The challenge left with them was to write or add thing about their March Break and outside school activities. Several were to be in a hockey tournament together. Another had a curling bonspiel in Saint John. Some were travelling to visit relatives or just to see some place, take a vacation trip. 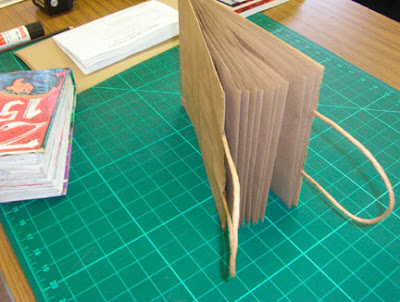 On Saturday I was asked if I was interested in writing a 5-10 line poem for a Prose Sculpture / Sculpture sur prose project with which ellipse mag has aligned itself. Poem to be based upon a prose text first published since 1 January 2000. Poem due by St Patrick's Day. Poems to be translated and published in ellipse 79 in "early May." [Gulp! I'm still working on the layout of issue 78. Still haven't received cover art images. Insides haven't been proofread. Have to work some more on that today.] Cloud cover prevented me seeing the total lunar eclipse just after sunset.

After the snowbot attack and sleep dep of early Monday morning, I sent a poem and 97-word bio note to Nela Rio for the upcoming 7th International Multicultural-Multilingual Poetry Reading (21 Match 2007) here in Fredericton. I was phoned by Suzanne at Goose Lane about the possibility of doing some contract preproduction coordination and print material prep work for their (Between the Covers) BTC Audiobooks Spring 2007 releases. We agreed to meet Tuesday morning. Also sent out a notice for a Feast of Fools V planning meeting on Tuesday evening.

Tuesday was a biting cold day. Wind chill of -24 when I walked to recyclables to the bis on the FREX grounds and to StuporStore for Borat. At the meeting I agreed to do the BTC Audiobooks work. Was in email correspondence with three other publishers and by phone with another after the news that Broken Jaw wasn't renewing its membership in the LPG. FoF V meeting went well.

Wednesday I revised the event bid and spreadsheet before submitting then to the Shirebof Lyndhaven's seneschal. Then I answered several questions about poetry received from two Grade 10 students in Calgary and confirmed that they had Access Copyright licencing to photocopy my poem "The Dogs" for in-class use. Photographed the CFB Gagetown MAC banner.

Thursday morning, I started cutting the first of my shield blanks with the jigsaw during live-death-guitar-from-the-apartment-above. Renewed my membership in CHSR with plans to resume live episodes of Ashes, Paper & Beans. Worked on the BTC intro scripts and emails to the actor-narrators. Met with Nela for follow-up from her trip to Argentina, and for upcoming event planning. That evening I rcvd an email from a poet in Edmonton inviting me to be on a panel with videopoem screening at the League of Canadian Poets PoetryFest 2007 in Edmonton in June. Checked online and found Air Can return fares starting at about $900. Would need a grant to cover that. Can I get one? Don't know but add it to the Friday "Do List."

So, Friday morning, I phoned artnb to ask about their Arts by Invitation program before adding that to my work list. Got asked if I'd be willing to be on a grant jury meeting in April. It pays well. I was interested! More freelance work is a good thing. I wondered if I should look into shooting news videopoem footage—make a short one—before PoetryFest in June? This has been a good week.

Saturday, after I finally blogged about a videopoem DVD and poetry/audio art/spoken word mini-CD rcvd in the mail, I drew up a work list of things needed to support the grant applications, to extract books from the warehouse in Georgetown, to prepare for the month end Year End for BJP. Then I sketched an idea for a coif I want to sew together to wear inside my fighter helm. For one not in the school or university system, it had been a very full March Break week.

Sunday morning I found a very short email from a poet friend in Calgary: "Long time no see / I have a proposition for you / Need to get in touch". Wha'sup? I wonder, before settling in to design the pattern for a MAC favour to hang off our belts. Hadn't hear anything to confirm that afternoon fighter practice would happen in Oromocto. Later I wrote emails to people scattered from Northern Michigan to Pale, Republika Srpska. Received emails from the first four actor-narrators and three sent the requested head shots and bio info. Put primer on the shield blank. Got a ph call from Liz @ Isaac's Way and went there to chat with her and Jenny. Didn't receive any further info on the "proposition". Maybe on Monday?

[Yes, I know March Break here ended Sunday (or most technically at the start of classes on Monday morning). Ending this week-long post there would leave the "proposition" a mystery. Please bear with me for one final paragraph.]

Monday morning an email arrived from Calgary. I've known Sheri-D since the early '80s when she was working at the Clochard Gallery in Vancouver and we were both members of the Vancouver Literary Storefront (even though I lived and worked in Banff). We'd last seen each other in Sept 2003 at The Word on the Street—Calgary where we read at its Poet's Corner along with Mick Burrs and poets. Her email read: "Would like to invite you to take part in / The Spoken Word Pilot Program / And SWAN (Spoken Word Arts Network) / At Banff Centre / Arrival April 08 / Departure April 19 / Unless you would like to stay / And take in the festival / Which runs until the 22". I was immediately doubtful because of the large money needed for travel, registration, accom, meals. Plus, the dates overran the artsnb jury dates, the WFNB AGM in Sackville, and the final presentation of book covers and designs by the NBCCD entrepreneurship class (but Julie, GSE Art Director, can handle that one!) I replied to the email. Suppertime I rcvd another email saying, "It's all expenses paid / All you have to do is come". That's seriously wild! Then Sheri-D phoned. We talked (interrupted by her other line). Offered me billet in Calgary for those nights. I agreed to send a photo of me and short cultural worker bio in the hope she could squeeze it into the program for the Calgary International Spoken Word Festival (design to be finalized today) and me into the festival's schedule for the days after we're in Banff. Sheri-D to buy my ticket today. Wha! Talk about fast. I respectfully bowwed out of the artnb jury duty. One way or another I'm definitely Alberta bound at least once this year. Wild and so unexpected. What a March Breakout! week for my writing and art, for Broken Joe.