I had intended to write here yesterday. More stories from the road or pictures and descriptions from road to Seaforth. But yesterday morning I checked my email first thing. An incident simply described in a close friend’s email filled my head and I ended up spending most of the day writing two short stories simultaneously. Stories for children, at that. Or they hopefully will be stories suitable for children once they’re edited and rewritten to clear the fog and replace up to 29-word sentences, some of the polysyllabic words, and too complex or abstract sentence structures. Don’t hold your breath waiting. 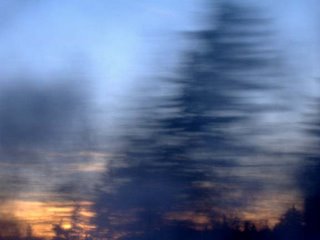 Okay, I’ll start with one moving sunset tree photo taken from inside the bus as we approached the Halifax International Airport exit.

Buddy in the aisle seat beside me was a 3rd year geek from UNB taking I don’t know what except for taking a new girl home to his parents’ for xmas. Who else but a geek would carry their student union health insurance plan brochure with them and joke about the monetary values attached to various injuries and dismemberments.

While the “segregation” drama was unfolding in the two rows behind us he inhaled chunks of Chris Bros. TNT pepperoni while the girl picked at the vegies and sliced meats sticking out of the side of her sub sandwich. She said it would be rude to put the whole thing to her mouth and bite it. [Why’d she buy it then?] Boy then dives into shortbread cookies, Coca-Cola, potato chips and bottled water. By the time we are a half hour out of Moncton, passing Sackville, he’s also lathered his hands twice with Vaseline Intensive Care lotion. [What’s so freakin’ special about his hands?] 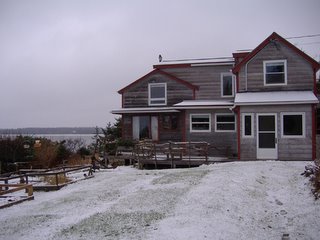 Seaforth is located by road on Highway 207 on the Eastern Shore of Nova Scotia. Eastern being east of Halifax, but the latest expansion of Halifax absorbed Seaforth and much more into the Halifax Regional Municipality (or HRM). My parents’ house is on the shore of Three Fathom Harbour. Beyond the string of low-tide connected islands there’s nothing until you hit Portugal. Beyond the other side of Three-Fathom Harbour we can see the mouth of Halifax Harbour. 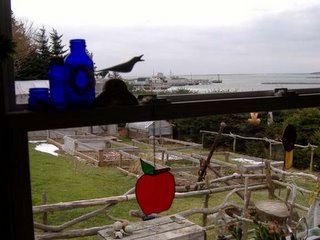 Out the kitchen window one sees the garden plots where many vegetables are grown and far beyond them a cluster of shacks and sheds. 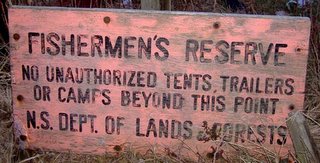 How long the Fishermen's Reserves has been here, I don’t know. Since whenever the Causeway Road was build to connect Hawkeye Island to the mainland. I’ve been coming out here all my life, since long before my parents bought a micro cottage and land here upon which to build this house. We came here to buy live lobster and fresh fish in season directly from the fishermen. [We still do.] We came here to dig clams and to enjoy the beaches. 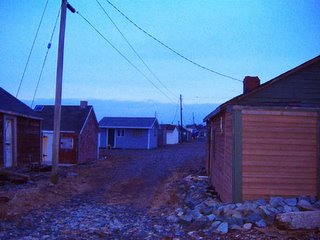 The reserve holds a crazy mix of working fishing season shacks, equipment sheds, wharves, boats, nets, lobster traps, crab pots, summer and artist cottages, human-loon-built structures, and mangy feline-leukemia sick cats fed by do-gooder city crazies we’d all like to put the run to. Some to the buildings are abandoned, Every year or two one gets lost to fire. two years ago Hurrican Jaun claimed several buildings and wharves and scattered the contents far and wide. Beyond the reserve is a breakwater, walkable at low tide, that connects to Wedge Island and Rat Rock. Beyond them is the vast Atlantic Ocean. 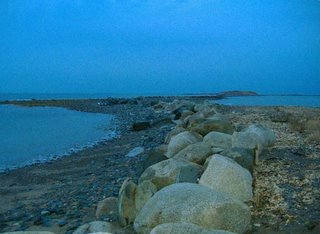 short stories? cool! turning blue waiting to hear all about it.

"By the time we are a half hour out of Moncton, passing Sackville, he’s also lathered his hands twice with Vaseline Intensive Care lotion. [What’s so freakin’ special about his hands?]"

...Maybe dude has a skin problem. Anyway, what's it matter to you? He's happy, and it's him getting fat, not you. Chill. If you're going to be so judgemental, why not focus your efforts on things that actually matter, instead of whining about stupid shit you don't understand, can't control, and has absolutely no bearing on your life.

Glad you got your stove fixed; Fredericton landlords suck.

It might be that Joe exaggerates sometimes, but I don’t find this society really lack of compassion. These days a lot of people get used to live and moreover enjoy living in their enormous stupidity and ignorance. So, it’s never too much critics.
R.

least joe poet does more than roast coffee in a barrel.