What is a Christmas season without something unexpected?

The day before’s dusting of sun disappeared by noon. Dad went and cut still-growing green onions in the cold frame out in the yard. Mom and I went for a morning walk back along the causeway and past the two spring-alive-with-peepers ponds now ice-covered and ringed with dried-on-the-stalk cattails and low spruce trees. A piece of land (22 acres, Mom thinks) for sale there. Much of it low, but there is one good ridge that might be build-on-able as long as there’s water suitable for a well. 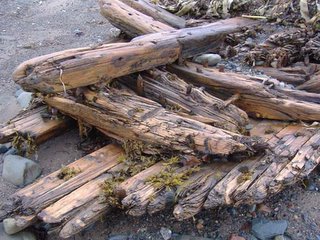 We walked back out to Hawkeye Island along one of the beaches where I used to play as a kid. A beach often busy with little shorebirds running in the surf line. This ship’s hull has been in the bank there for many years. Never visible until a few years ago, it is slowly revealing itself. I wish I had a large building lobby, or sunken floor area in a living room, vast enough to hold and display this wooden, pegged-together hull. A space with high open-raftered wood ceiling, skylights, a field stone wall with fireplace and a square of comfy chairs with end tables in the corners. But that’s the stuff of dreams . . .

This Christmas Day had its puzzles and troubles but not in the gifting or cooking (other than no one knowing how long mom had been cooking the turkey, and she suspects at least an hour too long). I called my sister in Toronto and got her answering machine. Ruth had done the same the night before when we were gathered at her place. Carol wasn't at her home or wasn't answering . . . ? 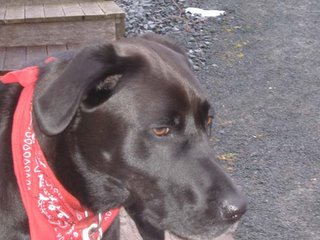 In late afternoon, while we were doing the gift unwrapping thing, Ruth & Mike’s black Labrador, Abbey, got into the pantry and attacked Mom’s cherry pound cake. It was on a low shelf. Dad thinks he accidentally left the pantry’s folding door open. That’s their normal position for the folding door even though it jams up the space in front of the microwave. I always close it or I’m forever banging into it and/or the pull-out shelf underneath the microwave.

Worse happened at dinner. When we were toasting the season, the day, Mom and my arms connected wrong. I was sitting to her left on one side of the table. My arm had been high above hers as I was clinking with Ruth across the table. Somehow, and I didn’t see it because I was looking at Ruth and Mike, her wine glass collided with the side or underside of my outstreached arm. Mom’s wine glass smashed into my water glass sitting on the table below. Both broke and scattered glass and liquids across our side of the table and our plates of turkey dinner. Mom fled the table and refused to come back even though we cleaned everything up and prepared new plates of food. At least she sulked instead of raged. That may have been the shock, I don’t know. Yesterday she mentioned just being too tired, exhausted. 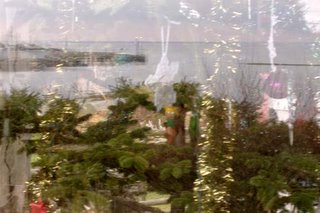 This photo is of the tree though the living room window with the reflected Fishermen’s Reserve giving depth and colour. An interesting blend, not double exposed or a negative sandwich. Something my eye saw that the camera actually captured well. I like it!

good story fodder at least. crazy holidays all around it seems. some absolute nightmarish goings on in barnbonia. love that shot!