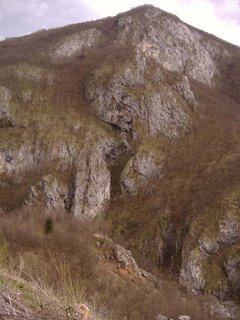 With three of the Department of English faculty assistants as my escort, I was taken me on a quick we'll-show-you-the-sights roadtrip. Sarajevo, now a city of 300,000 people, a 20-minute twisty gorge drive away for Pale. Folded limestone mountains lightly covered in birch and other deciduous trees. Unexploded landmines on the opposite side of the gorge from the highway. 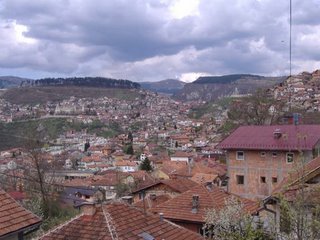 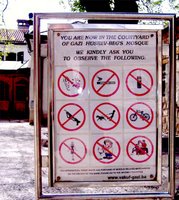 Waves of red tile roofs undulate over hill and valley buildings. An ancient Turkish hilltop form being rebuild as a historical-tourist attraction. Saudi money pouring in to build new mosques—ones with twin minarets. Brilliant white stones in Muslem graveyards. EU money building highways and other infrastructure through the country. The famous art school housed in a former synagogue. The former Austro-Hungarian city hall boarded up with plans to be restored. A small fifth century stone orthodox church downtown that said to be respected by those of all religions was visited . . . but the adjoining museum was not yet open for the tourist season. 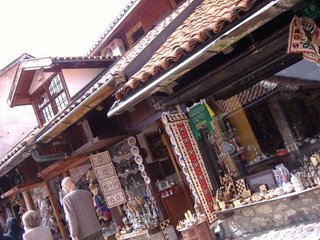 The long-time Turkish market streets adjacent to the old Gazi Husrev-Beg's mosque were busy with people on a beautiful, sunny mid-20s Celcius April afternoon. In one one wall was a drinking fountain with a sign stating something to the effect that anyone who drinks there waters will not be able to leave. None of us drank there. Traditionally known for their silver, textiles and leather work, the shops today are a crazy mix of modern trade brand good and the handmade. Through one shop doorway I saw a man hammering a Turkish coffeepot. I should have bought one. Maybe next time . . . 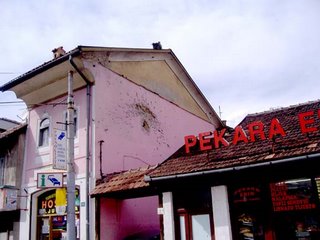 Evidence of the recent war is still visible. On the route from the Bosnian border to Pale I'd seen many bullet-marked and/or bombed buildings in the narrow passes and valleys, former ambulance and army trucks converted in farmyards and woodlots. Hotel Europa in ruins. The most striking visual, for me, was the "pink eye" hit pictured above on the side of a building on the edge of Sarajevo's old market sector.