Pale was a small mountain town when Sarajevo hosted the 1988 winter Olympic games. There’s still “bilbords” from that time along the main road through town, one of them a Hypo Bank bilbord, directing visitors to Jahorina ski hills for events. I suspect that Hotel Damis, where the Faculty put me up, was build for visitors to those games. Below is a view across part of the town/city with the frame of a not yet completed arena in the middle ground. 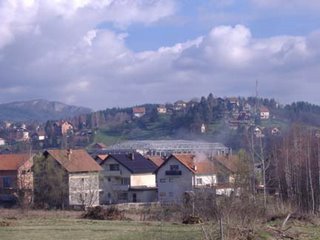 After the civil war that broke up Jugoslavia (after the Olympic Games), the population of Pale swelled to 30,000 with people moving from other parts of the federation of Bonsia. Pale is in the Republic of Srpksa. On the suggestion of Vesna Lopicic, one of my book translators, I contacted one of the universities where she teaches in rotation [In Oktbar 2004 I gave a talk for her at the University of Beograd and in Oktobar 2005 I was a participating artist guest at a conference at the University of Nis)]. 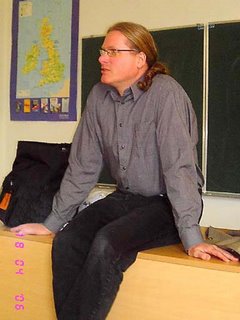 April 17-18, 2006 I was a visiting lecturer at the University of East Sarajevo, the first literary author to do so. Classroom talks and poetry reading slide shows. The above photo, by Natasha K., is from one of those activities and is posted here with her permission.

The university is quite new, about 10 years old. Founded after the war, they just got their faculty building a few months ago. Before then all the offices and classrooms had been using cold, inadequate space in a nearby factory building. The law faculty has its own new building. Shopping centars are being build tight beside the university to get the most explosure/access to/by the resident students.

Few of the students were born or raised in Pale and the surrounding area. Some still live in Sarajevo, as do many of the staff, and they travel back and forth daily. Most of the professors rotate in several times per month on an elaborate scheduling system from universities in Banja Luka, Beograd and Nis.