Q: How many t-shirts do you own?

Right now, I don't know how many T-shirts I have on the go. Hundreds, probably. One drawer is just CHSR & Highland Radio Ts. Know that I still have several wearable ones from my teens: a blue denim one that I have pictures of me wearing after having been swimming in Bell Lake behind the house in Dartmouth; an Oakley shirt—Richard Oakley's rockin' band from Halifax that I saw underaged in Gasworks on Yonge Street, Toronto; a "Beam me up, Scotty, there is no intelligent life on this planet!"

I've also made my own T-shirts over the years, usually screen printing or hand painting them, and I've played with the form in other media. Some people want to see me for the T that I might be wearing—a form of pop culture entertainment. Have many not otherwise seen in these parts or not often. Sometimes I trade for Ts, work for them, or am gifted them. Recent acquisitions include Little Feat's 2005 Smooth Sailin' tour shirt; a bargin (475 dinars, less than $8 CDN) Che in Bolivia shirt bought at the Beograd Book Fair last Oktobar that I've seen the year before; and a gift of a black and gold shirt from the Mojo Club in Senta. 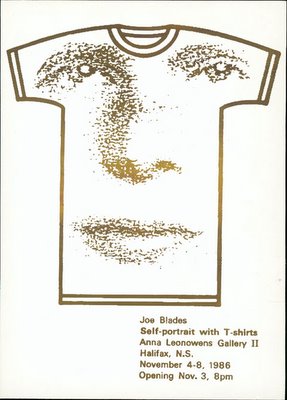 Thanks Joe! I was just wondering because it is listed daily as one of the "where am I now?" things in your blog. It took me a while to get it and since then had never seen a repeat. Next question... How often do you do laundry?