"Literary translation in Canada is largely restricted to works in the two official languages. Despite the fact the country has become increasingly multicultural and multilingual, there is remarkably little cultural engagement with the world in languages other than French and English. Thus it comes as a most pleasant surprise that ellipse has decided to devote a double issue to contemporary Brazilian writing. No less significant, as befits a bilingual journal committed to promoting translation and cultural awareness, ellipse presents the Brazilian texts not only in the original Portuguese but also in either French or English translation, and sometimes in both."—Albert Braz, Interfaces, no 13 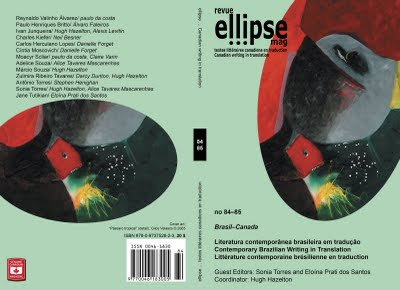 Published in Fredericton, New Brunswick, under the direction of Jo-Anne Elder. I am on the Editorial Board and do the design/layout. This issue features comtemporary Brazilian poetry and short stories.