Because of an article I was writing, I went digging on the shelves of publications to find the one copy I recalled still having of an ephemeral publication from the early 1990s …

"Many years later, after I had moved to Fredericton in 1990, a writer and professor of German at UNB Saint John, Rosi Jory, whom I met at Writers’ Federation of New Brunswick events, wanted to translate a tongue-in-cheek piece of mine, “Are You a Writer?”, into German. She got a colleague to translate it into French then produced both translations with the English version on folded 11” x 17” paper. It was my first piece of writing to be translated."

“Are you a writer?” had previously been published in Poetry Halifax-Dartmouth. It, and Suzanne Pons-Ridler’s translation into French, were included in my How to do it chapbook, In the Dark—Poets & Publishing (Broken Jaw Press, 1997). I’ll not reproduce the whole broadside here but I will put up Rosi’s German translation. 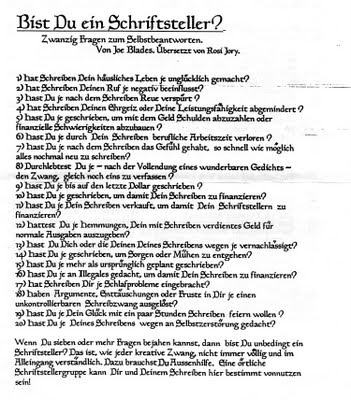