My photo on XYZ 89 cover 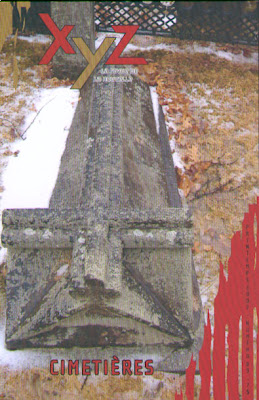 When Hélèn Rioux was in New Brunswick as an author-translator participate in Side by Side Festival Côte à Côte in Sept-Oct 2005, one of the projects she discussed was that she was a guest editor (with Daniel Pigeon) of a forthcoming issue of XYZ : la revue de la nouvelle on the theme of « Cimetières ».

Hélèn was interested in seeing photographs of mine for the issue: cemetery, graveyard, tombstone images. I've always taken pics of these but started taking some more with the magazine cover in mind. Last spring I email her a sample selection of pictures. Most were taken in Fredericton, NB, or in an orthodox cemetery in Zemun, Srbjia. In the end, this photo taken in the in the old cemetery between George and Brunswick streets was chosen.

Two copies of the issue and my contributor's cheque arrived from Montréal in today's post. Merci beaucoup! The issue includes stories by Bertrand Bergeron, Sylvie Massicotte, Claudine Potvin, and Lola L. Tostevin among others.