Messages from our not so distant past

"These proposals included cries for billions of new money for . . . more business subsidies in the name of 'cultural identity' . . . I was sought out as a rare public figure to oppose such projects.”
The Bulldog, 1997

As Prime Minister of Canada, Mr Harper has to represent Canada, not just his own narrow mindset. Canada is supposed to be a wise nation for its years, but we have again taken two steps back instead of two steps forward. Harper might be marching to his own drummer but that means he is out of step in our Canadian culture dance set. In addition, two steps forward will usually frame/crop a better, more interesting, photograph. Two steps forward might actually put one to the fore. Might draw attention. Might mean a commitment to a position on something or action . . .

This morning I was sorting through artist books, micro-press poetry publications, photographs, art supplies and papers in the shelves above my studio worktable. One of the treasures I found is the letterpress printed sheet reproduced below: 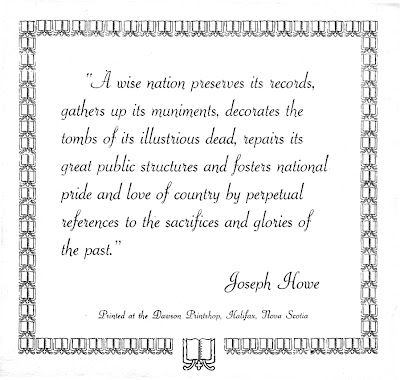 Words to the wise from a long ago writer, newspaper publisher—Novascotian, defender of the freedom of the press, and politician (including being Premier of Nova Scotia, a member of the first Dominion Parliament in Ottawa, and Lieutenant Governor of Nova Scotia at the time of his death in 1873). Joseph Howe's statue is on the grounds of the provincial legislature building in Halifax.

T-shirt: "PEN is Mightier than the Sword" PEN Canada
loc: Freddowntown
temp: -15 C
sound Must I Paint You a Picture?: The Essential Billy Bragg
Posted by Joe Blades at 9:14 a.m.