I'm in a whirl of activities now after a small funny of confusion upon arrival in Budapest. I wasn't met at the airport. Rather, the Airport Minibus had received a fax directing them to sell me a ticket and to deliver me to an address in the city centre (but they didn't give me the fax to read).

That sort of worked: after dropping several people off at hotels, including the Inter&#149Continental beside the very swollen Danube River, I was dropped off at a short street leading into a square. Unfortunately, I had no info on where exactly I was to go or who might be meeting me me there. I hoped Jelena but didn't know . . . Stood against the wall of a building after wandering around the not-square plaza square looking at not open restaraunts, a casino, statue-monument, new building construction site, postcard kiosk and the people. Regular people, one woman with hot pink hair, a delegation of Japanese men in a military-security escoted convoy of black cars . . . Was a cold day, threatening to rain. I added a second shirt. Eventually, after an hour and a half of waiting and wondering what next? the pink-haired woman I'd seen earlier came up and asked if I was Dzo. Found! I walked with Monika to an apartment in a building across the square where I was shown a room and left to rest. Jelena calls and arrives and, later, Vincent showed up. 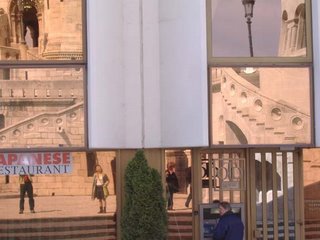 The next day was mid-20s C and sunny. Spent the day up in the old Buda castle, wandering around. Bought, wrote, and mailed three postcards (will send more from Beograd). Photo above is part of the walls of Buda Castle reflected in windows of a Hilton build inside the walls.

"Ön itt áll" is Hungarian for "You are standing here." 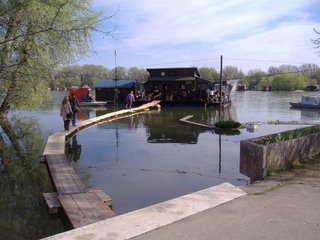 The Sava in Beodgrad is flooded similiar to the Danube in Budapest, but not as treatening, worrisome, as the river in Prague. Some floating restaurant & kafe bar owners/managers have been able to build temporary boardwalks from the current shoreline (water overtop of a riverside walking path and road) out to their establishments—such as the Skalar (above). Was a very busy Sunday for the ones open. They are great places to spend a few hours in relaxing conversation. 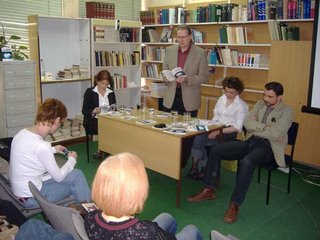 Dubravka, the translator of Pesme is kazamata messed up and wasn't able to participate in the first reading of this promotional reading tour so we asked Marko Kristic, the author of the 11 March review-article in Danas to travel with Jelena and me to Krusevac for the reading last evening. The bus to there was unbearable hot. Krusevac is a city of 65,000. I am/was the first overseas author ever to do a book promotion there. Had two television inverviews, a newspaper interview, and two radio stations covering the event—crazy good media coverage. Marko was excellent to introduce me and the book. The woman at the end of the table is our host, Sonja Velejkovic, Director of Narodna biblioteka Krusevac. We sold more books than we had with us—had to mail prepaid ones today.