Happy New Year's Day all ye fools. I'm there with you. Was doing laundry Saturday morning while running around town: biked to StupidStore then walked to Victory for limited provisions and stuff. I'm not long for this town . . . three days and two hours. No NASA monitored countdown, just the earth spinnin' its wobbly orbit. 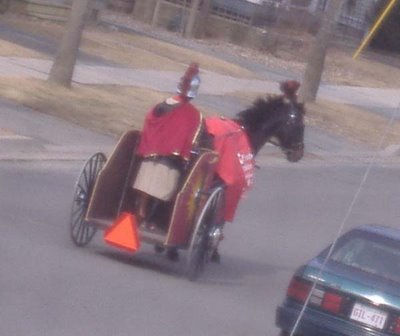 In the kitchen making food or gathering feast gear for the afternoon, I heard the clip-clop of a horse. Looked out the window to see a Roman chariot on George Street. By the time I got my camera out, it was rolling down the next block. Nice start to April Fool's Day . . . a moving advertisement for an Easter pageant here in town. 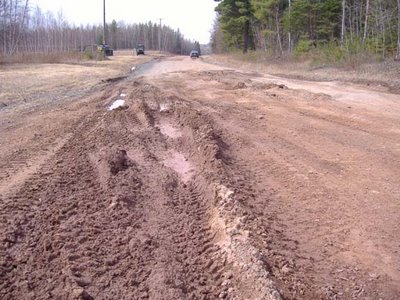 Heavily-guarded Feast of Fools this year. Vandoos had a working Checkpoint Charlie: radio communication, clipboards, generators and bright lights, coiled concertina wire in the ditches, sandbagged machine gun posts, troops with rifles, trucks and armoured vehicles everywhere. Those heavy vehicles, especially the loaded lowbed trucks had made a spongy, rutted Road of Fools back to the lodge. 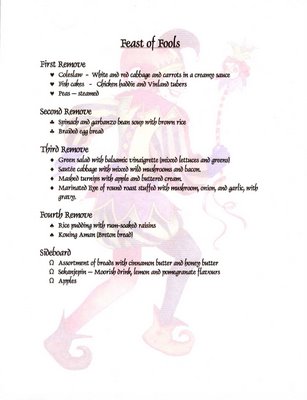 Lady Moriath of Kildare outdid herself superbly in preparing the feast. What great food! Food for more fools than were present. Everything from the soda, peasant, and braided egg bread through the soup, sautée cabbage and neeps, the marinated eye of round, the amazing rice pudding and Kouing Aman. What a not-to-be-missed spread. Vivat! Vivat! Vivat! 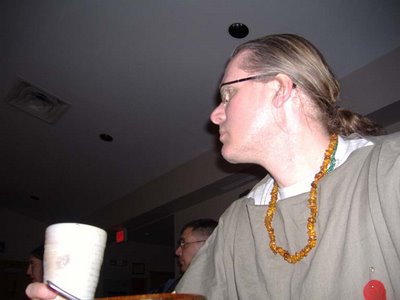 Me and my drinking vessel (made by Lee Horus Clark) filled with sekanjepin. 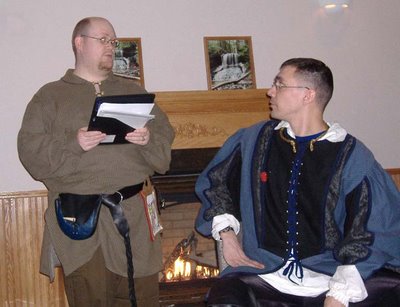 In the court of the King of Fools with Conogan as herald and Lord Mateo "the-Not-Challenged" declared King of Fools. Or King of Fools, making proclamations and charges, until he was defeated in a 2-of-3 rock & sissors challenge. Then Justine became Queen of Fools.