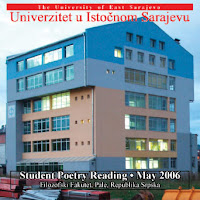 First half of the show was from a recording I'd requested but that I didn't believe I'd ever see: a student poetry reading a week of two after my April 2006 trip to the University of East Sarajevo in Pale, Republika Srpska. It included original poems by a number of students, readings of the lyrics in English of "Wish You Were Here" (Pink Floyd) and "Famous Blue Raincoat" (Leonard Cohen). Second half of the show started with Liz Niven's "Wick" & other poems followed by a feature of poems—The Farmer • What Ever Happened to the Rainbow? • The Boxing Ring • Shooting at a Liquor Store • To My Young Brothers • My Freedom Poem • My Son • Father Do You Care • To the Boogie Man • It's Me • For the Love that I Gave • Don't Go No Where—by Tod Gaines off his CD Rocky Mountain Oysters and it closed with "Buffalo" by Hilary Peach off Poems Only Dogs Can Hear.