Why is “(Collected)” on my latest book? 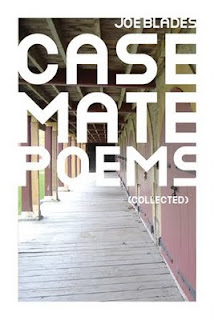 Since the release of my latest book there’s been several author, book, and scholarly creative work events that I’ve participated in with introductions by other people. Despite giving them the proper information, none of them have said the “(Collected)” when introducing my book Casemate Poems (Collected) published by Chaudiere Books in Ottawa.

I know, “(Collected)” seems like a subtitle similar to the retrospective “new and selected” or the “collected poems” volumes usually published posthumously. I’m not dead. I’m still writing (contractions included). What if I had called it “(Collected) Casemate Poems” or “Collected Casemate Poems” without the brackets around “Collected”? How would that be read? Would “Collected” still be dropped or would it become the short title for the book?

What if I said that “(Collected)” is not a subtitle—it isn’t a subtitle—but that it is consistent in style with section titles within this poetry collection? The book has five parts:

These are the poems from the 2004 edition of casemate poets (Widows & Orphans) with the addition of the 52-part “(reprise)” and the 6-part “(coda)”: that's what has been collected here!

What if I told you, dear reader, that there is another poem “casemate off-season” written in 2005 after the “(coda)”, after I returned from a Canadian Studies conference in Niš and the Belgrade Book Fair, Serbia? Should it have been included in this volume? I suggested it, without response.

I guess that it’s one for another book (after probably appearing on my next a little something … poem broadside next month (July 2011) for my Fredericton Arts Alliance-approved Artists in Residence 2011 Summer Series week—with “Casemate Poems (Redux)” the accepted residency’s project title. My first residency in the FAA casemate since Summer 2006 when I started writing the “Prison Song” poems).

How wonderfully (un)collected all this makes Casemate Poems (Collected)! I leave it open to the potential for new developments …
Posted by Joe Blades at 5:09 a.m.