Just in before the year end is my newest book, Prison Songs and Storefront Poetry with Ekstasis Editions in Victoria, BC. I received my first copies last week while on the Eastern Shore in Nova Scotia. 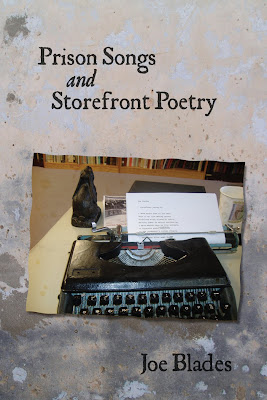 All of the poems in this book, except for three, were composed on the portable, manual typewriter in my cover photo. Writing, creating poems on a manual typewriter in this age of wireless laptop computers is a curiouly slower and more physical means of writing, and different again from writing longhand as I do in my journals. One “prison song” was was first written longhand and two “prison songs”, including the first one written, were written on the computer.

The idea for Prison Songs came to me from Marko Kristić, in Belgrade, Serbia. He told me while we were travelling in April 2006 on buses to and from a promotional reading in Kruševac for my book Pesme iz kazamata (Belgrade: i.p. Rad, 2005), that the book’s title translated from Serbian back into English not only as the original Casemate Poems book title but also as “prison songs”—a theme he explored in his review of the book. At the time he was a PhD candidate at the University of Belgrade. I felt I should try to write some prison songs.

Many of the Prison Songs I wrote in July 2006 during a one-week Fredericton Arts Alliance artist residency. The residencies happen in an open to the public space shared with another artist. During my week I shared with a potter, Ursula Sommerer, and we collaborated on a ceramic platter that she formed. When it was leather hard and the slip she applied had dried, I sat down for several hours and letter by letter stamped “prison song 05” into the clay. Ursula fired it in a kiln with iron powder in the letter forms to give them contrast. We exhibited the platter then sold it to the City of Fredericton for their art collection. Using the Fred-eZone free wireless network, I also blog posted each poem written as soon as I had retyped it into my laptop.

The poems “prison song 19” through “prison song 29” were written in a 24-hour period and they are both shaped and influenced by the posters gathered the morning of 21 July 2007 as the page layout of the 24-hour created issue of my New Muse of Contempt zine printed in a hand-sewn edition of 48 copies.

I believe that for some “prison songs” I put myself in the mindset of various people imprisoned or other wise trapped in a situation along with a few in which the writer in the one feeling trapped or locked up.

Storefront Poetry is the title given by The Rabbit Hole store staff to my one-week writing residency in September 2008. Much as in the early 1980s I had lived and worked several years in Banff and seem to make it back there every few years, this was my first time in Grande Prairie, northern Alberta, and nothern British Columbia. Because the storefront window would be too hot to sit in for hours at a time, I was set up with a small desk beside the store entrance with my manual typewriter, journal, and laptop computer. Security was surprised at the airport when they scanned my suitcase and found the typewriter. As with the FAA casemate residencies, I interacted with people who came by—sometimes having lively, extended conversations while I was writing.

If you would like an autographed copy of this book, send me $25 ($30 for copies to be shipped outside Canada):

or get a copy in person by helping me tour the book by hosting a reading:
• Next Canada Poetry Tours Reading Program application deadline ($50 admin fee) at the League of Canadian Poets is only a month away: 31 January 2011.
• Next Literary Readings program at Canada Council for the Arts deadline is 1 March 2011.
• The Writers’ Union of Canada’s National Public Readings Program ($75 admin fee) doesn’t have a deadline (but the fund does dry up before year end). Applications for readings after 1 April 2011 are being accepted.

I expect to be launching this book in Victoria in early June, and mid-June in Ontario.
Posted by Joe Blades at 7:26 a.m.