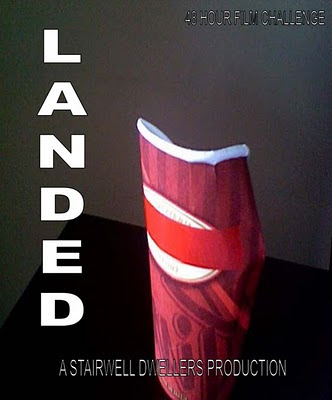 The mocumentary short film, Landed, was written, filmed and edited within a 48 hour period by the Stairwell Dwellers team of ten people after receiving an “inspiration package” anonymously prepared by one of the other 11 teams in the Fredericton 48 Hour Film Competition.

Landed is the story of an alien who crashed lands near Fredericton, and of the misadventures that befell him during his quest for fuel. The short comedic drama is framed inside an episode of a fictitious television program, The Panopticon. It consists primarily of an interview by Leonard Peck (Joe Ross) with the unnamed Alien (Joe Blades; Alien’s voice by Jared Mallard) and the Alien’s friend–interpreter (BronweN) with an artist’s re-enactment and flashbacks.

Stairwell Dwellers was led by two UNB MEd candidates, Matt Rogers (in Critical Studies) and Joe Blades (in Adult Ed). The rest of the crew consisted of high school teachers Matt has been working with, one youth from previous filmmaking pedagogy projects of Matt’s, BronweN (upon finding out that Joe Blades had/was in a team) and the partners of several of the crew.

All participating teams received an inspiration package prepared by another team. The package consisted of a “location”, an object, and a photograph—all of which must be used in the making of a short film under 10 minutes in length.

Stairwell Dwellers received “spaceship” as a location; a large 11" x 14" colour of someone on Team #1 as the photograph; and a green glove with dangling Easter egg-coloured fuzzy balls (a cat toy?) as the object.