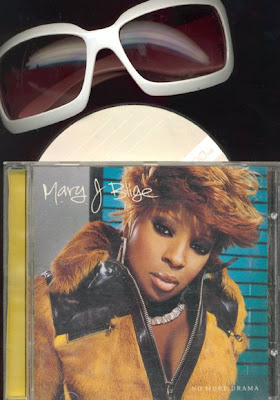 Found in the snow on my front step on York Street, Fredericton, NB, on Monday 5 Jan 2009 after 6 pm on my way inside after a overlong work day. DC shades, likely a woman's; an empty Blige CD case for No More Drama [wow, is that only almost-eight years old? Feels like an early Tina or something else]; an unmarked, burned CD with an almost 24-minute audio track allegedly created "December 31, 1994, 8:00:02 PM" but I can't hear it.

i came accros here some time ago..i find it so uncanny that you should find all those lost things, over and over..i am a pretty serious treker and yet i don't find these little things, found photo/ob-jet..

You should see my sculpture–collection of broken eyeglasses or all the single earrings found or the thousand(s) of 4-leaf clovers all across Canada, England, France, Serbia . . .wherever I am.